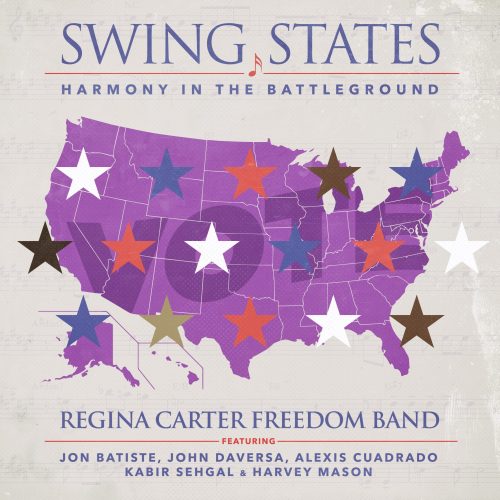 T rying to fit Regina Carter into a neatly defined musical category is pointless. She enjoys performing many styles of music—jazz, R&B, Latin, classical, blues, country, pop, African, and on and on. In each, she explores the power of music through the voice of the violin.

A recipient of the MacArthur “genius” award and a Doris Duke Artist Award, Regina has been widely hailed for her mastery of her instrument and her drive to expand its possibilities. In 2018 she was named artistic director of the New Jersey Performing Arts All-Female Jazz Residency, a unique summer immersion program for aspiring women jazz professionals. In December of that year, she was nominated for a Grammy for Best Improvised Solo for “Some of That Sunshine,” the title track on vocalist Karrin Allyson’s album. She is on the faculty of the Manhattan School of Music. Past positions have included artist in residence at the Oakland University School of Music, Theatre, and Dance; resident artist for San Francisco Performances; and resident artistic director for SFJAZZ.

Released before the most consequential election in American history, and in the wake of the COVID-19 pandemic and Black Lives Matter protests, Swing States: Harmony in the Battleground is a politically-charged fourteen-track collection that strives to illuminate the power of democracy and serve as a beacon of hope during these unprecedented times.

Born in Detroit, Regina began studying violin at the age of four using the Suzuki method. She attended Cass Technical High School in Detroit, and her training continued at the New England Conservatory of Music and at Oakland University in Michigan for jazz. She taught violin in public schools in Detroit and on a U.S. military base in Germany. She first gained attention with Straight Ahead, an all-female jazz quintet that recently celebrated its 25-year reunion at the Detroit Jazz Festival. She also recorded and toured for six years with The String Trio of New York.

In 1995 Regina released her self-titled solo debut on Atlantic Records. Three more albums followed in rapid succession: Something for Grace (1997), Rhythms of the Heart (1999), and Motor City Moments (2000), all on Verve. Traveling to Genoa, Italy, and making history by being the first nonclassical violinist to play Niccolò Paganini’s Il Cannone (“The Cannon”), the legendary violin built by Giuseppe Guarneri in 1743, inspired her next effort, Paganini: After a Dream (Verve, 2003). I’ll Be Seeing You: A Sentimental Journey (Verve, 2006) became a powerful and heartfelt tribute to her late mother. The connection to family, history, and tradition continued in Reverse Thread (E1 Music, 2010) and Southern Comfort (Sony Masterworks, 2014), drawing ties between her own African heritage and her family’s history. Her most recent release, Ella: Accentuate the Positive (OKeh, 2017), celebrates the music and spirit of her inspiration, musical legend Ella Fitzgerald.

Regina Carter is a recipient of the MacArthur “genius” award and a Doris Duke Artist Award.

Regina also can be heard on such albums as Arturo O’Farrill’s Fandango at the Wall: A Soundtrack for the United States, Mexico and Beyond; Stefon Harris’s Sonic Creed; John Beasley’s MONK’estra, volume 2; and James Carter’s Caribbean Rhapsody, along with Eddie Palmieri’s Listen Here!, which won a 2005 Grammy award for best Latin Jazz album, and the Grammy-nominated Freefall with Kenny Barron.

She has performed at numerous jazz festivals, including Monterey, Newport, Detroit, Atlanta, Bern, Montreux, Miami, New Orleans, Montreal, Mid-Atlantic (Washington, DC), PDX (Portland, Oregon), Rochester, and North Sea (Rotterdam, the Netherlands). Among the orchestras she has appeared with are the Detroit Symphony Orchestra, the Chicago Symphony, the Orquestra Sinfônica do Estado de São Paulo, the Knoxville Jazz Orchestra, the Atlanta Symphony, and the Chicago Sinfonietta. Particularly thrilling was her participation in the 2017 International Jazz Day All-Star Global Concert in Havana, Cuba.

Regina has twice been a Pulitzer Prize jurist. She is currently featured in J. Jill’s “Inspired Women” ad campaign

Her entire album [Swing States: Harmony in the Battleground] offers fourteen songs and short essays, stacked like buttermilk pancakes, fresh off the griddle, and drizzled with warm buttery blues, like hot Alaga syrup.