Peace and Love—And War No More

Our first edition of Songs of Protest highlighted 10 iconic civil rights protest songs. Putting them together wasn’t easy—but we did focus on the classics, and there was not all that much trouble picking the ten.

This month we focus on songs that protest war and its consequences, and this presents a much more challenging selection problem. There are so many great songs, and “antiwar” is a big bucket: we have songs that protest specific wars, songs that protest all wars, songs about who we send to fight them, songs about those left behind. There are songs about dying and songs about whether dying would have been better than surviving. We will stick to 10 songs to highlight and discuss, and we are more than a little idiosyncratic in our choices. The idea here is not just to find the 10 most popular antiwar songs—it’s to see what lies behind greatness and to try to capture the myriad of themes captured in antiwar songs. We have grown the playlist a bit from last month, just because there are so many great songs that we want to listen to with you.

As with our first month, we include some video clips in the descriptions of the highlighted 10 songs, usually of vintage or unique versions of the songs. We hope you read and listen in peace and love.

Down By The Riverside 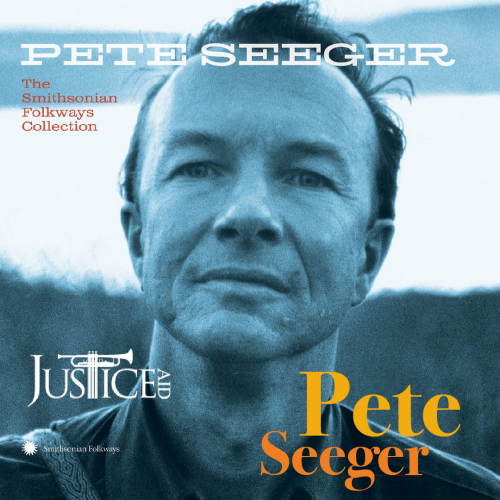 Down by the Riverside was a spiritual going back to the Civil War era, but it was recovered and became a mainstay antiwar song. Like many such songs, the lyrics in various versions vary, but they almost all include reference to laying down sword and shield and proclaiming, “I ain’t gonna study war no more.”

Here is an excellent video of Pete Seeger doing it with the great blues duo, Sonny Terry and Brownie McGhee. Another vintage version from Sister Rosetta Tharpe is worth a view as well. If you have not paid attention to Rosetta Tharpe, you should. She has been cited as an influence by many, including such diverse artists as Aretha Franklin, Jerry Lee Lewis, Keith Richards (and Eric Clapton and Jeff Beck), Karen Carpenter, Isaac Hayes, and Tina Turner. When inducted into the Rock & Roll Hall of Fame, Johnny Cash gave her special praise as one of his heroes, whose singing and playing influenced his song writing. 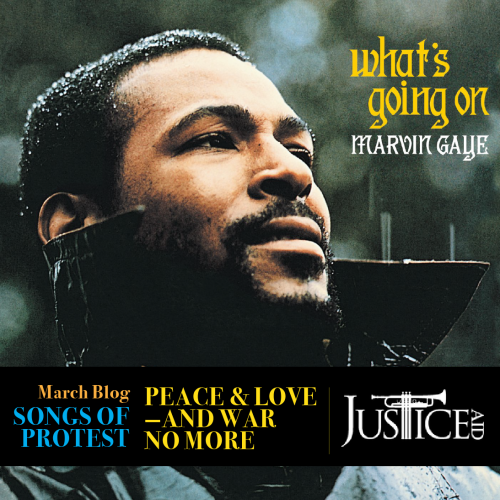 On the surface, Marvin Gaye’s What’s Going On is not entirely an antiwar song; in fact, its genesis was Renaldo Benson, one of the Four Tops, witnessing police brutality at a demonstration in Berkeley. However, in Gaye’s singing and production, the song evokes the exhaustion of the Vietnam War. The song is a centerpiece of the album by the same name, which is a song cycle told from the point of view of a soldier returning from Vietnam only to witness poverty, racism, and injustice. In the playlist we use the original, but here is a video of Gaye performing it live in 1972, his voice in perfect form.

Where Have all the Flowers Gone? 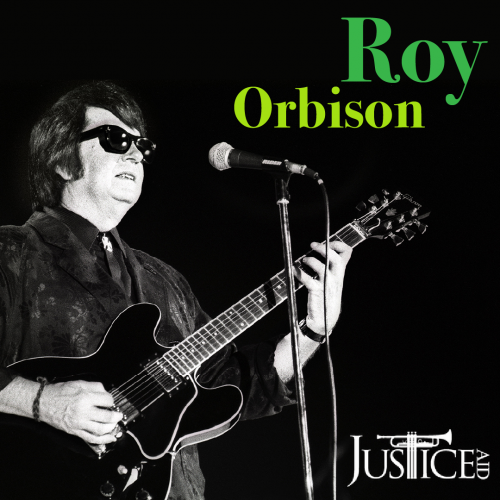 This is perhaps the quintessential pacifistic antiwar song, recorded by many, which became a central protest song during the Vietnam War. The additional lyrics by Joe Hickerson created the circularity that makes the song so resonant—the flowers picked at the beginning of the song become graves gone to flower at the end. Here is a live version from Joan Baez—at the Kennedy Center Honors for Seeger. We use a beautiful version from Roy Orbison for our playlist.

And the Band Played Waltzing Matilda 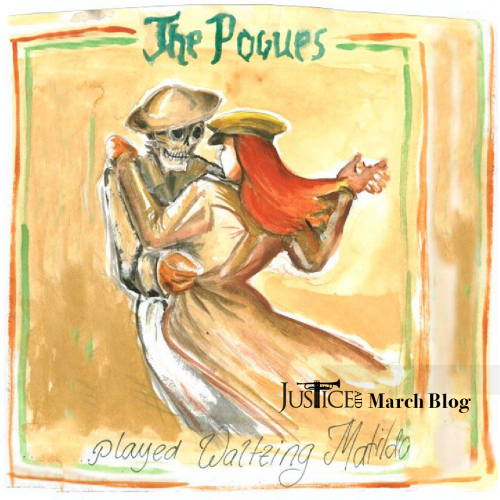 Yes, this is an idiosyncratic choice. This great song was written in 1971, during the Vietnam War, but it was written from the standpoint of an Australian maimed in the fighting at Gallipoli in 1915. The song captures the pointlessness and horror of that battle in a moving personal narrative. It has been recorded many times, but the version by The Pogues has a wrenching personal tone and is the one on our playlist. And, for a shorter song on the same theme—the sometime horrors of the wounded survivor—there is a great Kenny Rogers song (written by Mel Tillis, a country star in his own right), Ruby (Don’t Take Your Love to Town), about a disabled veteran’s wife taking her love elsewhere—it is also on the playlist. So many antiwar songs are about the war, not the ones who come back from war, and we want to also listen to the songs about the returned.

The War After the War

Written by Mary Gauthier and others 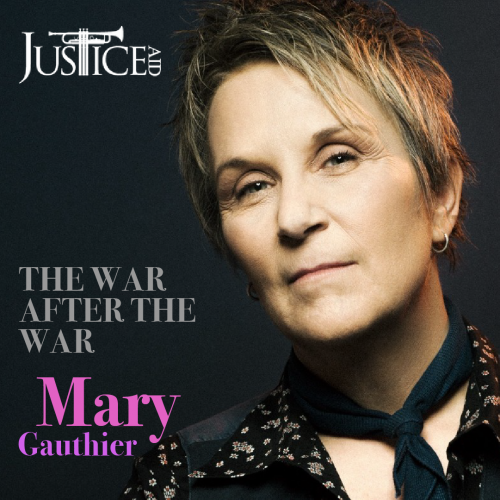 But of course it is not just those who fought and came back that are traumatized by war. There are those they left behind, those they came home to. We realize that many of you may not have heard The War After the War, but we include it because it is perfect at capturing the point of view of a spouse left behind when a loved one went off to war, and who got back someone different—someone pained and at a loss. It opens,

The song is from the remarkable Rifles and Rosary Beads, a collection of songs that Mary Gauthier co-wrote with U.S. veterans and their families, through Songwriting With Soldiers, a nonprofit organization that pairs U.S. veterans with professional songwriters.

Here is Gauthier performing the song in an excellent video. Though we picked this one song from the collection, we urge you to listen to them all—the collection refracts so many usually ignored issues arising from war generally and our recent conflicts specifically. And, in regard to the relatives of those damaged by war we also include in our playlist Elton John’s beautiful Daniel—which is sung from the perspective of a younger brother seeing the damage to his loved older brother combat veteran.

As always at JusticeAid, we are moved by how justice and the arts amplify each other. For this project, of course, we are especially interested in how music illuminates our collective humanity and creates the empathy that impels us to concern ourselves with justice for others. One great explanation for how this works came from the great painter and artist, Charles White. When asked why he began painting musicians and using music for his artistic themes, White responded,

“It is not that I have ever tried to translate the music directly into pictorial art. But the music expressed so perfectly, in a way that touched the heart more directly than any other art, the dignity, the outpourings of tenderness, the social comradely feelings, and the humanity of the people. It is that that has helped my efforts, in paintings and drawings, to present a feeling of universal humanity.”

From “Charles White: A Retrospective” at MoMA, Fall 2018. Charles White would have understood JusticeAid and our mission. 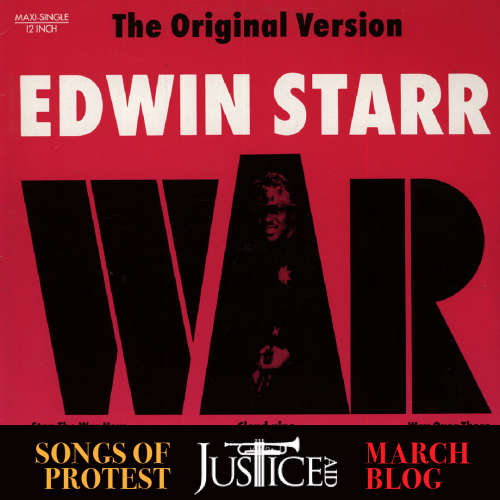 Motown finally started to get a little political by 1969, pushed by the artists who were impelled not only by antiwar sentiment, but also the conditions in Detroit, which had seen its riots in 1967. This song was first given to the Temptations, who recorded a version of it on an album, but when it got a little popular, and there was a demand for a single, the song was given to Edwin Starr, another Motown artist.

Management worried that the Temptations had fans who would not like them being political. Best thing that ever happened to Edwin Starr—and in any event Starr’s version is way better. We include his in the playlist—but because we love you readers, here is Bruce Springsteen’s outstanding live cover (with the song starting about two minutes into the video). Here’s hoping Springsteen’s rediscovery of the song was good for Starr and the guys who wrote it. 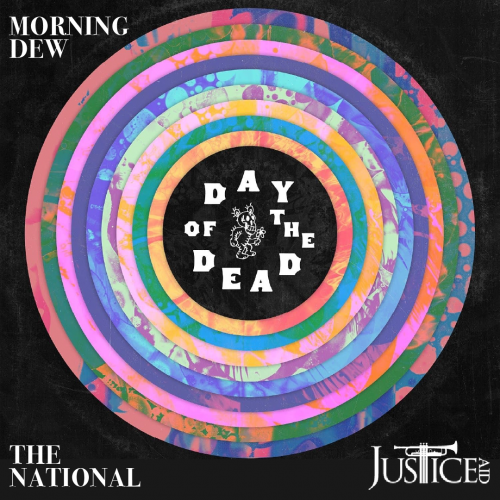 Morning Dew was written at a time when people worldwide were forced to contemplate what a post-nuclear war would look like, when threats of nuclear war were very real, and where some dangerously thought about “winning” a nuclear war. In U.S. elementary schools teachers would conduct drills as to preparing for nuclear war—ludicrous drills. One would be instructed to duck under one’s school desk and cover one’s ears—as apparently radiation could be heard, and it could not get under desks.  .

Bonnie Dobson knew better, and she wrote a song that captured post-nuclear war devastation. It is written as a conversation between two survivors, and their wondering at the absence of any others, and at the silence—they keep thinking they hear something—but they don’t. The song ends with the couple deciding to walk outside in the morning dew, as they are going to die in any event.

The song is mostly associated with the Grateful Dead and their stretched-out versions of it. Here at the top is a pretty good video of one from 1989. However, most Dead fans would point to the impeccable May 1977 version at Cornell’s Barton Hall, for which video is not available, but is nonetheless here for your listening.

Recognizing (but not necessarily understanding) that the Grateful Dead are not for everyone, this third video, a version by Ms. Dobson, herself, with Robert Plant, restores the song to its folk roots.

For our playlist, we include a very cool version by The National.

Give Peace a Chance 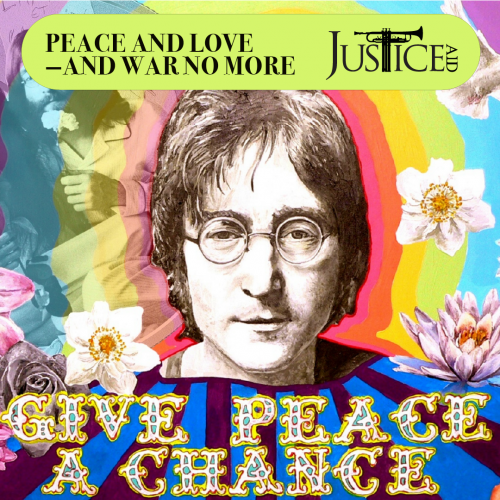 John Lennon and Yoko Ono turned his first directly antiwar song (and first non-Beatles song) into a happening—recording it June 1, 1969, live in his and Yoko’s honeymoon bed in a Quebec hotel. The video is iconic. Sung by many, at protests and otherwise, but only one version stands the test of time—the spontaneous original, surrounded by activists, celebrities, and a frantic sound engineer trying to capture it. 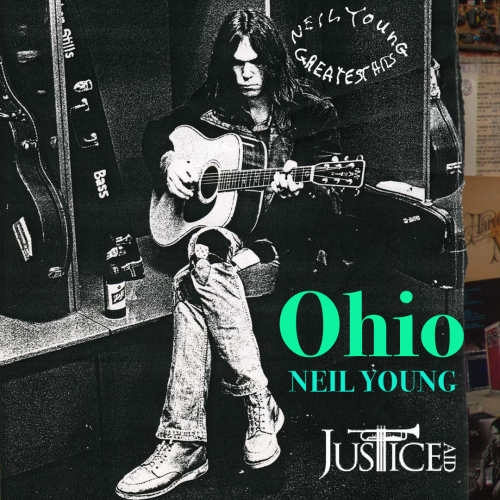 This needs no explanation. By 1970 it was necessary to not only write antiwar songs, but to write songs about unarmed antiwar protestors being killed. Four students dead at Kent State turned war protesters into casualties of the Vietnam War. Neil Young captured the tragedy in a song that still resonates today, undoubtedly one of the most important protests songs ever written. 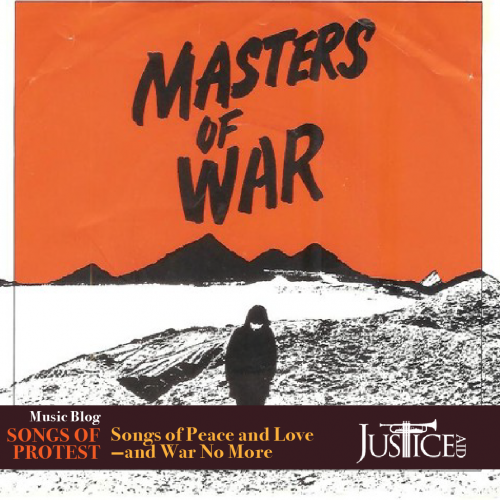 Of course with Dylan, the question is which song to highlight, among the many great choices. Masters of War is not specific to any war. Instead Dylan went to a meta-issue: those who profit from war, those who make wars. He has been quoted as saying that the song partly reflected Dwight Eisenhower’s farewell address on leaving the presidency, in which he warned of the influence of the military-industrial complex. We don’t know if those attributions are accurate, but is good to think of Eisenhower, who knew war, concerned about its proliferation, and Dylan’s omnivorous mind turning that to a song. The song has been covered by many, but none so well as Eddie Vedder, captured doing it live here, at Dylan’s 30th Anniversary as a recording artist.  In our playlist we include a couple other Dylan antiwar masterpieces.

So, that’s it—10 antiwar songs to highlight, more to listen to. There are so many choices out there, and if you want to see an outstanding compendium of protest songs, check out our friends at The Ongoing History of Protest Music.  Those folks are engaged in a labor of love that is a treasure trove of history and protest songs, updated often.

Over here at JusticeAid we know you can’t end a war with a song, and we know that it is action that leads to results, but song can prod, song can unify, song can inform. In that spirit, we will enjoy listening with you. See you next month with our next edition of Songs of Protest.

Our work this election year centers around Voter Suppression & Voter Engagement. Your contribution goes in support of this vital effort. Please spread the word and sign up for JusticeAid email to receive the “Songs of Protest” blog and information on our concerts and initiatives.